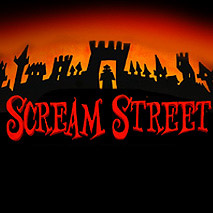 Lead broadcaster CBBC is on board to air the fast-paced comedy-horror for 8-10 year olds in the UK. Coolabi has secured ZDF Enterprises as global TV distributor for the series (excluding the UK, US and Australia). ZDF Enterprises has also taken German licensing rights to the property.

Scream Street is being produced by Manchester-based Factory TM, which draws on a wealth of experience in stop-motion animation. Renowned puppet and model-makers Mackinnon & Saunders (Fantastic Mr. Fox, Frankenweenie) are creating the cast ensemble. CBBC will start airing the series in 2016, while select footage will be available for the first time at MIPCOM this year.

Written by Tommy Donbavand and published by Walker Books, Scream Street follows the story of Luke Watson: a regular teen apart from the werewolf gene! When the Government Housing of Unusual Lifeforms (G.H.O.U.L.) gets wind of Luke’s hairy habit, they transfer him and his parents to Scream Street – where surfer-dude zombies, sarcastic vampires, glamorous witches and just plain-bad monsters put a whole new spin on community spirit.

“Scream Street is a stylish, spooky comedy, full of wonderful characters that will have instant appeal for the older end of the CBBC audience. The style and pace promise to be like no other CBBC stop-frame animated show”, comments Cheryl Taylor, Controller CBBC.

Zoë Bamsey, Director of Production & Development, Coolabi, says: “Scream Street is a truly individual book series that we know will translate into a fantastic and funny animated show for TV.  We’re excited to be working with such amazing partners to bring to life the books for existing fans and new audiences.”

Phil Chalk, MD of Factory TM adds: “The show is innovative and combines cutting edge digital technologies with stop-motion. We are looking forward to creating a genre busting show.”

Katharina Pietzsch, Director ZDFE.junior of ZDF Enterprises says: “We are delighted to be partnering up with CBBC, Coolabi and Factory TM on this fantastic project and look very much forward to bringing the show to partners and markets worldwide. With its super cool look, great storylines and humour, it will appeal to kids and their families all over the globe.”

The Walker Books-created thirteen-book series is already a publishing hit with kids globally and has secured a growing fan base since the launch of the first title in 2008. Fans include authors Darren Shan and Philip Reeve, who describes Scream Street as ‘Like Harry Potter with extra bite!’ The books have already sold into territories including USA, China, Denmark, France, Germany, Italy, Japan, Portugal, Russia and Sweden. Helen McAleer, Director at Walker Productions, Walker Books’ production division, is an Executive Producer for the television series.

Factory TM is an independent, innovative, multi-genre animation studio working in broadcast and advertising. Embracing new talent technology and delivery platforms the studio has developed a reputation as a world leader in the design and collaborative development of immersive entertainment.

Prolific creators and award-winning producers of animated content, Factory TM worked on some of the most iconic animated television projects of the last 20 years, including Roary the Racing Car, Fifi and the Flower Tots, Muddle Earth, Raa Raa the Noisy Lion and is currently producing The Clangers for CBeebies, Coolabi, Smallfilms and Sprout.

CBBC is the BBC’s multiplatform offering for 6-12 year olds bringing the very best drama, entertainment and factual programmes to its young viewers.

CBBC is the most-loved and most-watched channel by children in its target age group. 1.5 million 6-12s tune in each week (up from only 296,000 in the year of launch). CBBC is committed to broadcasting at least 550 hours of factual programming and 85 hours of news every year. Newsround and Blue Peter remain audience favourites with the latter receiving over 2000 emails and letters every week.

CBBC aims to encourage children to find out more about existing interests and inspire them to develop new ones; helps them understand the world around them and provides an entertaining watch when they just want to relax.

70% of 7-12 year olds now go online most days in the week too. Unique browsers to the CBBC website currently stand at over 915,000 per week.

The majority of our output is UK-made, reflecting children’s lives in the UK today. Popular programmes on the channel include Horrible Histories, Operation Ouch, Wizards Vs Aliens, The Dumping Ground and documentary strand My Life.

ZDF Enterprises was founded in 1993 as a commercial subsidiary of ZDF, one of the largest and most renowned TV broadcasters in Europe. Headquartered in Mainz, Germany, ZDF Enterprises is responsible for the worldwide sale of programs, the making of international coproductions, the acquisition of licenses as well as the merchandising of strong program brands in its own name, for the ZDF, and for third parties. ZDF Enterprises has successfully established itself as an independent market player on the German and international stage. Bound into a strong group, the company manages the largest German-language stock of programs in the world and, next to this, a continuously growing portfolio of international productions consisting of series and miniseries, TV movies, documentaries and children’s programs. In the course of the development and diversification process carried out up to now, many business fields in the television and media domains were made accessible in the ZDF Enterprises group. Thus ZDF Enterprises can provide a comprehensive, full-service offering today, and covers every step in the chain of origin and exploitation of successful TV programs, from development to production and up to the marketing of TV licenses, merchandising rights, online rights and much more.

Walker Productions is a global division of the Walker Books Group, working with production partners, broadcasters and distributors to develop content for television from the Walker Group’s three main publishing companies: Walker Books UK, Candlewick Press and Walker Books Australia/NZ. All deals are structured individually for each property and partnership arrangement and we try and involve our authors and illustrators as much as we can. Our commitment to quality content, high production values, extraordinary talent and creative partnerships are all things that resonate through our publishing, licensing, production and digital divisions of the business, and we are looking to work with partners who share our vision and values, and projects that represent our commitment to quality. Walker Productions projects on air include Tilly and Friends for CBeebies, Fleabag Monkeyface for CITV and Henry Hugglemonster for Disney, and Hank Zipzer for CBBC.