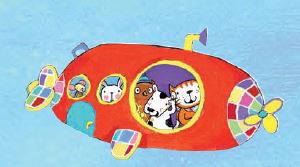 CITV has acquired the 52 x 11 minute animated series, which has been airing successfully on commissioning broadcaster Nick Jr UK since May 2011, and will be broadcast on CITV from this Spring.

Poppy Cat brings to life the wonderful world of the pre-school children’s character created by Lara Jones in the book series that has sold over 2.5 million copies worldwide. The series is co-produced by Coolabi’s television production arm Coolabi Productions and the Emmy shortlisted and BAFTA award-winning King Rollo Films.

This important new UK terrestrial deal for Poppy Cat follows on from previous sales to more than 20 broadcasters in other international territories including Sprout in the US, Disney Junior in Spain and Latin America, Nick Jr Australia, RTE Ireland, across Scandinavia, and TVO, SCN and Knowledge Network in Canada.

Michael Dee, Director of Content at Coolabi says: “Securing a terrestrial deal with CITV for Poppy Cat in the UK is terrific news. This latest signing with yet another huge broadcast partner demonstrates the enormous appeal that Poppy Cat has, both in the UK and internationally.”

Jamila Metran, Programme Manager, CITV adds: “We are delighted to be partnering with Coolabi to be the UK terrestrial home for Poppy Cat. The series is a perfect fit for Mini CITV, encouraging our viewers to learn through fun and imaginative play.”

Coolabi is a leading provider of high quality children’s and family entertainment, internationally, across all media.
Coolabi’s expertise lies in development and brand management, particularly through the channels of TV production and licensing and merchandising.

CITV is ITV’s dedicated children’s brand broadcasting across both the terrestrial and digital platforms. The CITV channel was launched on March 6, 2006 and is uniquely aimed at both the preschool and 4-12 year old audience.

CITV offers a wide mix of programming including entertainment, comedy and animation which aim to both entertain and inform its young audiences.  CITV’s programming focuses on original UK productions with additional series.