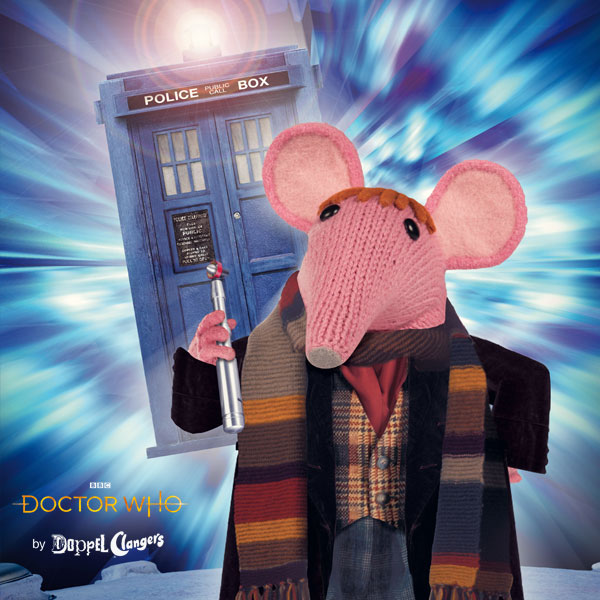 Independent international media group and rights owner Coolabi Group has today announced an exclusive new partnership between the award-winning brand, Clangers, and BBC Studios’ legendary adventure brand, Doctor Who, as part of Clangers’ 50th anniversary celebrations.The iconic British space-based adventurers come together to launch the new DoppelClangers merchandise range, a series of iconic and quirky mash-ups of Clangers with different icons from pop culture, from musicians through to scientists and celebrities. The new Doctor Who range will launch today exclusively on Clangers’ official online shop (shop.clangers.com) and the Doctor Who official online shop (shop.doctorwho.tv)

The first line in the DoppelClanger product range will be inspired by the Fourth Doctor, as played by the legendary Tom Baker. The designs, featuring Major Clanger dressed up in the Doctor’s long coat and colourful scarf, will be available on a range of items from mugs and t-shirts to tote bags.

The DoppelClangers Doctor Who series is set to continue, initially with the first seven Doctors, ensuring the products will have true cross generational appeal.

True aficionados will know that these much-loved programmes, Clangers and Doctor Who, have come together before, across space and time, in the 1972 Doctor Who episode, ‘The Sea Devils’ with Jon Pertwee as the Doctor. In the episode, the Master watches Clangers on his television screen, whistling along with their tuneful interactions.

More recently, Clangers featured a Doctor Who reference within the special commemorative episode ‘The Visitor’, which aired on Saturday on CBeebies. The storyline, features an astronaut, inspired by space scientist Dr Maggie Aderin-Pocock MBE, who is greeted on arrival with gifts from the Clangers, including a hand knitted Fourth Doctor-style scarf. The episode is a homage to ‘The Tablecloth’ episode from the original series which also celebrates the moon landings.

Michael Dee, Director of Content at Coolabi Group comments: “We are absolutely thrilled to be partnering with BBC Studios to produce this unique and wonderful selection of products that will appeal to all ages. Clangers and Doctor Who are such iconic and timeless brands with shared values of friendship, adventure and imagination and we can’t wait to see what fans old and new think of this ‘out of this world’ product range.”

Jason Easy, Head of Licensing BBC Studios said: “This is an ideal collaboration of much-loved British characters embodied in a range of exciting new products. For anyone that ever loved the time travelling Doctor or those loveable Clangers, this merchandise will make the perfect gift.”