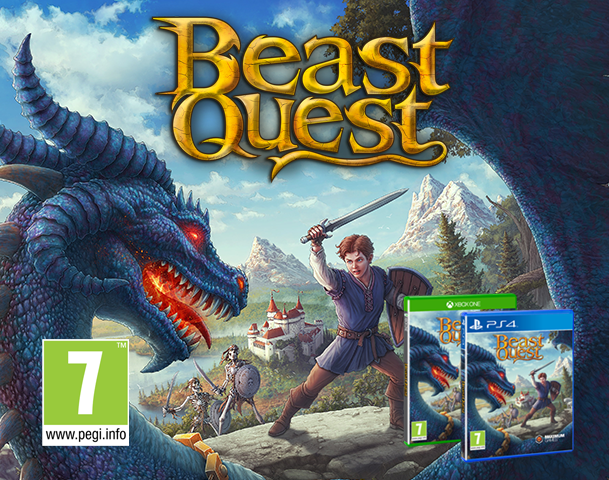 The console game, which launches today in the US, will launch on Friday 16th March across the UK and Europe at major retailers and digitally on the PlayStation®4 system, Xbox One and PC. Major retailers to stock the game include Amazon (US/UK), Argos (UK), GAME (UK), Smyths (UK), Saturn (Germany), BestBuy (US), GameStop (US) and Micromania (France).

Developed by Torus Games and based on the hit book series by Adam Blade, the action-adventure game is the first console game to come out of the hit Beast Quest franchise. The game, which contains a rich, progressive storyline, vibrant settings, and an excess of compelling challenges, is the tent-pole product release for brand in 2018.

To support the release, Coolabi has invested in three weeks of television advertising in the UK which will run from 16th March on popular TV channels such as Disney Channel, Nickelodeon, CITV and Cartoon Network.

Maximum Games is funding a significant video advertising campaign with SuperAwesome, one of the largest kid’s digital marketplaces in the world which reaches over 300 million kids per month across mobile, web and online video. The month long campaign will target multiple territories including USA, UK, Germany and France, with a focus on the 7– 12 age group.

A dedicated press campaign is underway by Coolabi Group with Beast Quest competitions and features placed across key parenting and kids titles. Families Online, First News, 110% Gaming and Mega plus many more are set to host prize bundle giveaways alongside features and puzzle pages for families to engage with together.

FamilyGamerTV created a family-led video promoting a selection of Beast Quest products including the latest books and the brand-new Beast Quest console game. The video, which launched on 8th March in the lead up to the game release, was promoted on websites geekdad.co.uk, familygamer.tv, as well as related social media channels.

Coolabi collaborated with Micromania, the number one gaming retailer in France, to produce a mail out to its 200k users along with an additional online Beast Quest drawing competition on Micromania’s Facebook page, which has over 650k followers.

Maximum Games has delivered an integrated digital campaign, with investment in social media advertising with added spend on trade and supporting retailers, supported by a solid PR campaign with a focus on generating press reviews. Maximum Games has secured competitions across key press including The Mirror Online and The Fun (supplement of The Sun).

Maximum Games has shared a range of video content with its key influencers over recent weeks, including a teaser trailer and the full Beast Quest trailer, which comes out today. In addition, a developer diary video was developed by Torus Games and was announced ahead of release to introduce gamers to some behind the scenes thinking on the development of the Beast Quest game.

Marketing support by Beast Quest book publisher, Orchard Books, includes promoting the game through a series of banners on the Beast Quest website and newsletters. Adverts for the game are printed within the latest Beast Quest book series, due to be released in April 2018, and they will host competitions on Hachette Kids and Orchard Books’ Twitter pages.

Naomi Dare, Head of Digital at Coolabi, comments: “We are delighted to be kick starting this fully integrated marketing campaign with the amazing team at Maximum Games, after working closely with them on the development of the game over the last year.”

She added: “The new console game is another great step in the evolution of Beast Quest, and provides us with the opportunity to create even more noise about the brand as a whole to a wider audience. We’re really excited to see what Beast Quest fans, old and new, think of it!”

The Beast Quest franchise has so far released over 120 books to date and sold more than 18 million copies globally. Last year, the book series celebrated its 10th Anniversary and Working Partners, a Coolabi company and the UK’s leading creator of series fiction for children, buy cheap generic soma announced a new deal in 2016 with Orchard Books to continue publishing through to 2026.

The new console game product release follows the incredible success of the Beast Quest gaming app, co-produced by Coolabi and Miniclip, which was launched in 2015 and has more than 10 million downloads to date.
For more information, please contact:

Beast Quest is the popular fiction book series by Adam Blade, first published in July 2007 by Orchard Books. The hit children’s book series has sold 17 million copies globally, with 8 million copies in the UK alone, and has been translated into 30+ languages, with 120 titles published to date. In 2016, Working Partners, the UK’s leading creator of series fiction for children and a Coolabi Group company, announced a new deal with Orchard Books to publish hit book series Beast Quest until 2026. Each series focuses on the themes of friendship, fantasy and adventure, encouraging children to read by infusing the subject matter with elements they enjoy. Beast Quest is favored by parents and teachers as the structure encourages children to read a whole series (4 or 6 titles), rather than just one book. The Beast Quest gaming app, co-produced by Coolabi and Miniclip for iOS, Android and Windows Phone, has already achieved over 9 million global downloads and continues to attract several hundred thousand new downloads every month.

To learn more about the Beast Quest series, visit www.beast-quest.com.

Coolabi Group is a leading independent international media group and rights owner specialising in the creation, development and brand management of children’s and family intellectual property rights. The group, made up of Coolabi and Working Partners, has particular expertise in television, digital and books. Coolabi owns the rights in over 20 TV series and some 373 half-hours of programming; it has shows which have aired in more than 140 territories on channels including: ABC, Cartoon Network, CBeebies, CBBC, Clan / TVE, Disney, F5, ITV, Kika, Netflix, Nickelodeon and Sprout. Brands owned and/or represented by Coolabi include the multi-award-winning remake of Clangers, which airs on CBeebies, and Scream Street, shown on CBBC. Other properties include Beast Quest, Poppy Cat, Purple Ronnie and the Smallfilms properties Bagpuss and Ivor the Engine. Brand extensions include the Beast Quest gaming app, co-produced with Miniclip for iOS, Android and Windows Phone. The group also creates original series fiction for publishers and has created some 100 published series, consisting of over 1,000 books, sold in more than 40 languages. Four of these series, Warriors, Beast Quest, Animal Ark and Rainbow Magic, have sold over ten million copies each. Coolabi Group has reached an agreement with Alibaba Pictures Group Limited for the film rights for Warriors. Alibaba Pictures intends to develop Warriors into a world-class fantasy movie which has David Heyman (Harry Potter) as producer. The Warriors book series has sold more than 30 million copies worldwide.

Maximum Games ranks as a top 15 global video game publisher of interactive digital entertainment spanning all genres and supporting multi-platforms. The company’s mission is to provide a proven and strong hands-on approach to publishing, marketing and distribution. Established in 2009, the company is led by female entrepreneur Christina Seelye, a seasoned executive of digital consumer products and channel marketing. Under Seelye’s leadership, the company has been recognized with numerous awards, such as “Fastest Growing Tech Company” by American Business Awards, and has made the Inc. 5000 list of Fastest Growing Private Companies for the past three years. Maximum Games has offices in both the U.S. and UK and continues to expand its scope of global publishing and distribution via direct reach and strategic partnerships.

For more information on Maximum Games, visit the company’s website at www.MaximumGames.com.

Torus Games is a veteran independent developer, located in Melbourne, Australia. The studio, over the last 23 years, has created many family-friendly video games based on popular brands for practically every gaming console. With more than 120 games delivered, Torus has worked with most of the major video game publishers and brands, including Leapfrog, Warner, Disney and DreamWorks. The team is particularly excited to be bringing the amazing Beast Quest adventures to life.