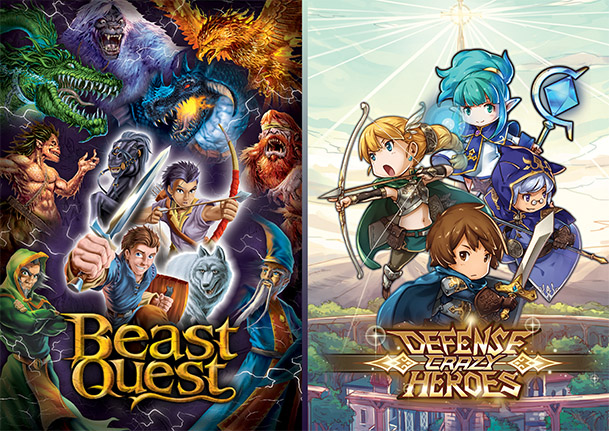 Independent international media group and rights owner Coolabi Group has agreed a deal for Animoca Brands Corporation Limited to develop and publish a brand new Beast Quest mobile game using the game engine from the hugely successful Crazy Defense Heroes.
The launch of the Crazy Defense Heroes mobile game earlier this year has generated $2MM in its first quarter on iOS alone. Following initial success in China, the game has recently launched in the Americas and Europe with the Middle East soon to follow.

Animoca Brands and Coolabi will partner on the production and distribution of the game, which will bring the playstyle and technology of Animoca Brands’ highly successful tower defence and collectible card fantasy mobile games Crazy Kings and Crazy Defense Heroes together with the stories and characters from the Beast Quest brand.

Beast Quest is the best-selling series children’s fantasy book series, particularly popular with boys aged seven years and older. It is produced by Working Partners Limited, a Coolabi Group company, and includes 120 titles, has been translated into over 30 languages and sold over 18 million books to date.

Yat Siu, co-founder and director of Animoca Brands, commented: “We are thrilled by the opportunity to work on a powerfully appealing brand like Beast Quest, and we look forward to bringing the fun and challenging gameplay of the Crazy Kings franchise to a wider audience. We will work closely with Coolabi to develop an engaging mobile game for all the loyal fans of Beast Quest around the world.”

Jeremy Banks, Chief Executive of Coolabi Group, added: “Coolabi are relishing the opportunity to work alongside the team at Animoca Brands. The Crazy Kings franchise is already proving its success in the mobile game market, and Coolabi are excited to merge the rich storytelling and compelling characters from the Beast Quest universe to create the next thrilling iteration for game players globally.”

The first Beast Quest mobile gaming app launched in 2015 and has over 11 million downloads. This award-winning app continues to see over 400,000* monthly active users and its sustained level of popularity is a driving factor in this next mobile game development.

Additionally, last month saw the launch of Beast Quest console game, a brand new adaptation made for Xbox One and PS4 published by Maximum Games which is already receiving re-orders in key territories like the UK.

Marie-Clare Scott
Sundae Communications
Suite 2A, 22 Lever Street, Manchester, M1 1EA
0161 278 1452 / 07851074774
marieclare@todayissundae.co.uk
@todayissundae www.todayissundae.co.uk
About Animoca Brands
Animoca Brands buy soma pills online (ASX: AB1) publishes globally a broad portfolio of mobile games and subscription products including several games and e-books based on popular intellectual properties such as Garfield, Thomas & Friends™, Ever After High and Doraemon. The Company is based in Hong Kong and Finland. For more information visit www.animocabrands.com or get updates by following Animoca Brands on Facebook, Twitter or Google +

About Beast Quest
Beast Quest is the internationally popular fiction book series by Adam Blade for 7-10-year-olds, published by Orchard Books. The books have sold over 18 million copies globally across 100+ titles and have been translated into over 30 languages.

In 2017, as the series celebrated its 10th Anniversary, Working Partners, a Coolabi Group company, announced a new deal with Orchard Books (Hachette) to continue publishing through to 2026.

The series focuses on friendship, heroism, fantasy and adventure across a far-reaching, epic and multi-layered narrative. Children relate to the central characters of Tom and Elenna as they battle against dark forces of magic and, of course, Beasts!

The Beast Quest gaming app, co-produced by Coolabi and Miniclip for iOS, Android and Windows Phone, has already achieved over 10 million global downloads and continues to attract several hundred thousand new downloads every month. The mobile game featured on iTunes “Best New Game” in over 120 countries.

About Coolabi Group
Coolabi Group is a leading independent international media group and rights owner specialising in the creation, development and brand management of children’s and family intellectual property rights.

The Group, made up of Coolabi and Working Partners, has particular expertise in the media of book, television and in the management and growth of its brands. The Group creates original series fiction for publishers and has crafted well over 100 published series, consisting of some 1,600 books, sold in more than 40 languages. Warriors, Beast Quest, Animal Ark and Rainbow Magic, have each sold well over ten million copies.

Coolabi also owns the rights in over 20 TV series and over 400 half-hours of programming; its series have aired in more than 140 territories on channels including: ABC, Amazon, Cartoon Network, CBeebies, CBBC, Cartoon Network, Clan / TVE, Disney, France 5, CITV, Kika, Netflix, Nickelodeon and Sprout. Brands include the multi-award-winning remake of Clangers, which airs on CBeebies, Scream Street, shown on CBBC and Poppy Cat (Milkshake).