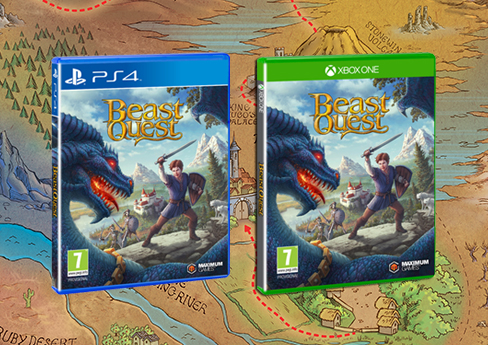 Independent international media group and rights owner Coolabi Group has signed a deal with top global video game publisher Maximum Games, to develop a Beast Quest console game for the Playstation® 4 entertainment system, Xbox One and Windows PC, which will be released on 31st October 2017.

Developed by Torus Games, this action-adventure console game with RPG elements is the first console game from the hit Beast Quest franchise, which has released over 120 books to date and sold more than 17 million copies globally.

This deal follows the incredible success of the Beast Quest gaming app, co-produced by Coolabi and Miniclip, which was launched in 2015 and has more than nine million downloads to date. The new Beast Quest console game will have the same look and feel as the gaming app but with exciting developments in gameplay that make it a new and dynamic gaming experience. Spectacular environments with rich open-level design will offer daring heroes opportunities to discover challenging quests, powerful upgrades, and ancient secrets hiding just beyond the horizon.

Valerie Fry, Director of Licensing for Coolabi Group, comments: “The team at Maximum Games have taken great care to understand Beast Quest and why it inspires such passion from its followers. This game represents a completely new way for fans to engage with this one-of-a-kind universe, and we’re thrilled to see it come to life!”

Maximum Games is owned by entrepreneur Christina Seelye, and the company recently acquired the IP and talent that developed the Minecraft Story mode game, among many other children’s licensed games. “The high-fantasy setting, characters and lore of Beast Quest are the perfect foundation for a modern adventure game on consoles,” said Christina Seelye, CEO of Maximum Games. “We’re building a gorgeous world true to this imaginative series that millions have come to love while giving fans of adventure games everywhere a unique experience to enjoy.”

Beast Quest is the internationally popular fiction book series by Adam Blade for 7-10 year olds, published by Orchard Books. The books have sold over 17 million copies globally, with 8 million copies in the UK across 120 titles and has been translated into over 30 languages. 2017 is the series 10th Anniversary and Working Partners, a Coolabi company and the world’s leading creator of children’s series fiction, has announced a new deal with Orchard Books (Hachette) to continue publishing through to 2026.

The series focuses on friendship, heroism, fantasy and adventure across a far-reaching, epic and multi-layered narrative.  Children relate to the central characters of Tom and Elenna as they battle against dark forces of magic and, of course, Beasts!

The Beast Quest gaming app, co-produced by Coolabi and Miniclip for iOS, Android and Windows Phone, has already achieved over 9 million global downloads and continues to attract several hundred thousand new downloads every month. The mobile game is of console quality and featured on iTunes “Best New Game in over 120 countries”.