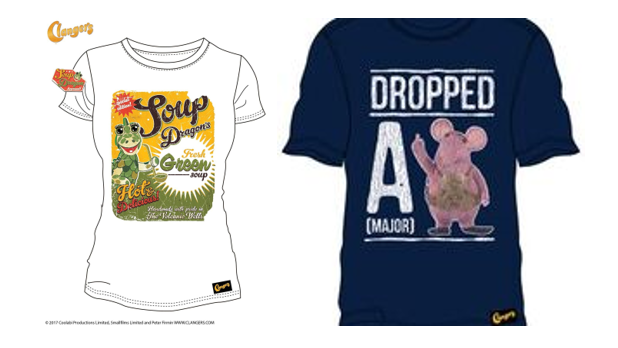 Independent international media group and rights owner, Coolabi Group has today announced that the ever-popular pre-school animation brand Clangers will enter the adult apparel market in a deal with Fashion UK to produce a range of t-shirts.

The creative brand, which has a hugely engaged social community, has consulted its 140k Facebook fans on the range. They were presented with a choice of four designs and  have voted for their favourites; the two most popular designs are now due to be made, and will be available from the end of August 2017.

Created by Fashion UK, the fun tees are illustrated with humorous slogans and use the brand’s new adult nostalgia-led style guide  of the much-loved characters of the show, and will be available in a selection of colours and sizes.

Fée Heyer, Senior Licensing Manager, Coolabi Group comments: “We have a unique brand with Clangers; it’s loved by toddlers and pre-schoolers watching it on CBeebies today but we know there is also a huge amount of love from the generations that remember watching it when they were children.”

She adds: “We wanted to hear from these passionate adult fans, so we asked them which t-shirt designs they would prefer to see go into production and the response has been fantastic!”

Gurdev Mattu, Fashion UK’s  Managing Director, also comments: “We are very excited about the opportunity of re-kindling some of those fond childhood memories of Clangers, through an exciting well-designed adult clothing range”.

Voting closed on 24th July 2017 and the winning t-shirts were announced via the Clangers official Facebook page.

The t-shirts, will be available to buy at www.vanillaunderground.com from the end of August 2017.

Clangers is an internationally renowned pre-school stop motion-animation featuring a family of loveable, pink, mouse-like creatures who communicate in whistles and eat soup from their little blue planet’s soup wells.

The show, originally created by Peter Firmin and Oliver Postgate, first made its debut on BBC Television in 1969, and returned to CBeebies to huge fanfare in June 2015 with a brand new, multi-award winning series of 52 x 11 episodes featuring Mother, Major, Tiny, Small and Granny Clanger, which quickly became one of CBeebies’ top rating shows. There is a new series in production for 2017.

The new Clanger series’ have all the magical, surreal, gentle, melodic elements of the original show and transforms it into an even more vivid, vibrant, technically improved production. The show uses the same stop-motion animation techniques as the original but with improved technology and a larger team. It is narrated by Michael Palin in the UK and William Shatner in the US.

In 2015, Clangers won the BAFTA and Broadcast Awards for best pre-school animation. In addition, Clangers won the Kidscreen Best Animation in Creative Talent Award, plus the 2016 Voice of The Listener and Viewer (VLV) award for excellence in broadcasting, the 2016 Pulcinella Award for best pre-school animation, and the 2016 Bulldog Televisual Children’s Award.

In December 2016, Coolabi launched creative brand campaign, #ClangersForKindness, which generated exceptional consumer reach and engagement. The campaign’s brand communication integrated TV and radio advertising, YouTube, PR, sponsorship, social and blogger interaction. To date, over 10,000 kindness wishes have been made and the #ClangersForKindness hashtag has had a reach of two million.