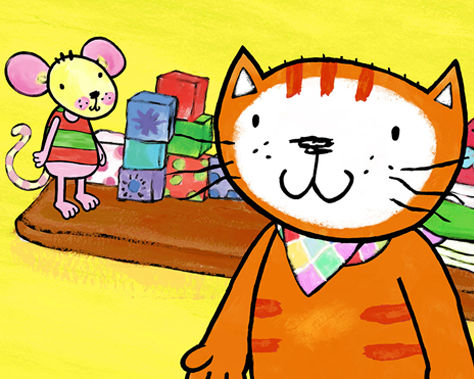 Sheffield, 6th July, 2017— Channel 5 today revealed a new look for their popular pre-school block Milkshake! – the first refresh for the brand in its twenty-year history. Speaking at The Children’s Media Conference in Sheffield, Sarah Muller, Head of Children’s Channel 5 unveiled Milkshake’s new brand logo and opening title sequence and took attendees through the rationale behind the brand refresh. Milkshake! airs weekdays on Channel 5 from 6:00am- 9:15am and on weekends from 6:00am until 10:00am.

“I am truly lucky to have this exceptional opportunity to guide a much-loved pre-school institution to the next level, providing a contemporary context for modern, media savvy kids and future-proofing it for coming generations, without losing any of the existing charm and appeal,” said Sarah Muller, Head of Children’s, Channel 5.

The Milkshake! brand refresh will launch on air from the 24th July at 6:00am with ‘All New Week;’ a schedule packed with new episodes including new acquisitions Floogals (Nevision) Poppy Cat (Coolabi) and SIMON (Go-N) as well as new episodes of hit pre-school programming such as Peppa Pig and Thomas and Friends. All New Week will see costume characters visit the studio and new Milkshake! presenters join the existing team. The premiere week will be the first opportunity for viewers to see the new Milkshake! studio which retains many of the key features from the original studio while allowing more space for in-studio activities such as crafting and dance routines.

The only public service broadcaster to air children’s content on its main channel, Channel 5 is committed to broadcasting 600 hours of UK-originated kids’ programming a year. Milkshake! debuted in 1997 and is the home of hit UK pre-school programming such as Peppa Pig, Ben and Holly’s Little Kingdom and Little Princess. The Milkshake! brand refresh arrives as block enjoys one of the most successful ratings period in its twenty year history. 2017 has been Milkshake’s best ever year for share for kids 4-15 and audiences 16-34. Over 10 million views of Milkshake programming each month on Channel 5’s digital platform My5.

The new Milkshake logo, opening sequence and studio was designed by Yeen Trinh and Sylwia Bernatowicz.

Channel 5’s Milkshake is home to some of the world’s favourite preschool characters.  There is a range of stimulating and engaging programmes that include strong story led animation, genuine documentaries for pre-schoolers and presenter led high quality musical entertainment.  2016 saw Milkshake! achieve its strongest year to date amongst Children, 4-9s, HWKs and HWKs 0-3. Milkshake! was the number one breakfast destination (6-9am) for Children and 4-9s in 2016. Channel 5 broadcasts 24 hours of children’s programmes every week.  Milkshake is on air from 0600 – 0915 every weekday and 0600 – 10.00 on Saturday and Sunday.  For further information visit www.milkshake.tv

Channel 5 launched as Britain’s fifth public service channel in March 1997 and has been owned by Viacom International Media Networks since September 2014.  Channel 5, 5STAR, 5USA and Spike reach 4 in 5 of the UK viewing public each month with a broad mix of popular content for all the family across entertainment, documentaries, sport, drama from the UK and US, films, reality, comedy, children’s and news.  My5 is a new service allowing viewers to watch content online for free from Channel 5, 5STAR, 5USA, and Spike.