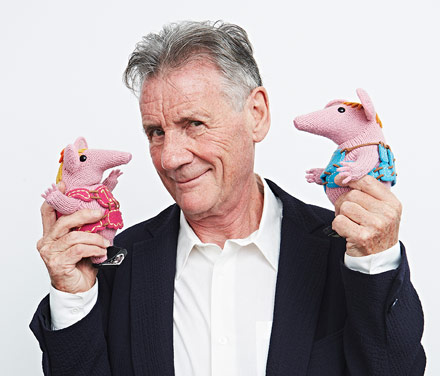 Michael Palin confirmed as narrator for the new Clangers

Award-winning actor, writer, presenter and comedian Michael Palin has been confirmed as narrator for the much-anticipated new Clangers series (52 x 11’) – a contemporary version of the British classic animated television show. The new series is being co-produced by CBeebies, Coolabi Group, Smallfilms and Sprout, and will air in the UK in Spring 2015.

Michael Palin is best-known for being one of the members of the comedy legends Monty Python and for his ground-breaking travel documentaries. Of his role in the new Clangers series, he said:“The world of the Clangers is delightful and irresistible. It’s a real pleasure and a great privilege to be a part of its return to television.”

The Clangers marks the multi-award winning entertainer’s first foray into children’s animation, having previously authored a collection of children’s books. His humour, insight and warmth have made him a firm favourite both in the UK and abroad and he is now turning his talents to yet another sphere, observing and commenting on the charming, surprising and wonderful activities of the Clangers.

Palin takes up the mantle from the late Oliver Postgate, creator and narrator of the original series, who is often cited alongside original Clangers’ co-creator, Peter Firmin, as one of the founding fathers of UK animation.

Oliver’s son, Daniel Postgate, who will be executive producing the new series alongside Peter Firmin, commented: “Michael Palin was my first and favourite choice, so of course I’m absolutely delighted. Among other things, he’s been a warm and charming guide for us all in his extensive travels around this world, so it seems wonderfully appropriate that he should pack his bags once more, go off across the starry expanse of space and do the same for the world of the Clangers.”

Peter Firmin said: “As an old stick-in-the-mud I don’t often change my mind and from the very beginning I wished and hoped that Michael Palin would agree to be our narrator. Once in a blue moon wishes come true.  This is once in a blue moon. I hope Michael enjoys his voyage to our little Blue Planet.”

Kay Benbow, Controller of CBeebies, said:  “It’s incredibly exciting to be bringing the Clangers back onto the screen for our young audience to enjoy, and to have Michael Palin involved really is the icing on the cake.  He’s such an iconic entertainer and will bring a wonderful warmth to the Clangers stories as he takes CBeebies viewers on out-of-this-world adventures.  We’re really excited that he’s agreed to be involved.”

Jeremy Banks, CEO, Coolabi Group, also commented: “Michael Palin is a wonderful entertainer and someone who is part of the fabric of British television. The narrator is such a crucial element of the show and we know he will be an engaging and insightful observer of the Clangers – the perfect companion to audiences watching from Earth.”

The Clangers originally launched on the BBC in 1969 and are pink, long-nosed, inventive and loveable mouse-shaped creatures who live on a small blue planet, out in the starry stretches of space, not far from Earth. Its surface is peppered with holes topped with metal dustbin lids, which flip open with a ‘Clang!’ to reveal steps down to their home beneath the surface of the planet – containing a series of interconnecting tunnels and caves.Kind and generous creatures, they communicate with distinctive whistles and a narrator comments on the thrilling and often hilarious events which occur in every episode.

The Clangers are a family. The cast of characters consists of Major, Mother, Small (a boy), can i order valium online Tiny (a girl) and Granny. Other favourites returning to the new version are the Soup Dragon, The Iron Chicken, the Sky Moos, the Glow Buzzers and the mischievous Froglets. These and many other peculiar creatures, create a warm and harmonious world of fun, imagination, exploration and invention.

Michael Edward Palin, CBE, FRGS is an English comedian, actor, writer and television presenter known for being one of the members of the comedy group Monty Python and for his travel documentaries. Palin wrote most of his comedic material with Terry Jones. Before Monty Python, they had worked on other shows such as the Ken Dodd Show, The Frost Report, and Do Not Adjust Your Set. Palin continued to work with Jones after Python, co-writing Ripping Yarns. He has also appeared in several films directed by fellow Python Terry Gilliam and made notable appearances in other films such as A Fish Called Wanda, for which he won the BAFTA Award for Best Actor in a Supporting Role.

After Python, he began a new career as a travel writer and travel documentarian. His journeys have taken him across the world, including the North and South Poles, the Sahara Desert, the Himalayas, Eastern Europe and Brazil. In 2000 Palin was honoured as a Commander of the Order of the British Empire (CBE) for his services to television. From 2009 to 2012 Palin was the president of the Royal Geographical Society. On 12 May 2013, Palin was made a BAFTA fellow, the highest honour that is conferred by the organization.

CBeebies is dedicated to delighting and surprising its pre-school audience and it remains the UK’s most watched and most loved channel for the under-sixes. Just under half of the target audience tune in every week (parents and carers with children aged 0-3 and four- to six-year-olds in digital homes) and our reach is over double that of our nearest competitor.

Our most popular shows include In the Night Garden, Something Special, Octonauts, Justin’s House, Sarah and Duck, Tree Fu Tom, Swashbuckle and Old Jack’s Boat.

The CBeebies website is hugely popular with our young audience and their parents and helps extend the ‘learning through play’ philosophy with an average of 1.2 million unique browsers. Last summer, we also launched our first app – CBeebies Playtime – which has already been downloaded almost 3 million times, and this summer we followed that with a brand new CBeebies Storytime app.