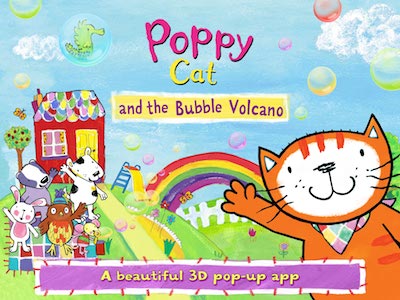 StoryToys partners with Coolabi to release Poppy Cat and the Bubble Volcano, a 3D pop-up activity app based on the award-winning Poppy Cat series

Dublin, Ireland – August 28th, 2014 – StoryToys a leading publisher of interactive books and games for children today announced the release of Poppy Cat and the Bubble Volcano, an enchanting 3D pop-up activity app based on the best-selling Poppy Cat books and T.V. series. It is produced in collaboration with Coolabi, a leading international media group, and The Kindly Ones Productions. The app is available from August 28th on the App Store for iPhone, iPad and iPod, priced at $2.99 / €2.99 / £1.99.

Poppy Cat originated as an award-winning book series created by Lara Jones which has sold more than 2.5 million copies worldwide. The Poppy Cat TV show has been distributed in over 140 territories and has over 100,000 likes on Facebook. The Poppy Cat and the Bubble Volcano app features an original story that sees Poppy and her friends dive deep into the ocean to explore a magical underwater world. Its release coincides with the UK launch of series two of Poppy Cat on September 8th on Nick Jr.

“We’re thrilled to have the opportunity to work with Coolabi on the much-loved Poppy Cat brand,” said Barry O’Neill, CEO of StoryToys. “The Poppy Cat stories celebrate imaginative play and problem-solving, and, as such, are an excellent fit for StoryToys. Our apps give kids a way to directly interact with their favourite characters in a richly immersive experience, stimulating the imagination while simultaneously testing their problem solving skills with cleverly interwoven games and puzzles.”

Val Fry, Director of sales adds, “Poppy Cat is all about making everyday adventures extraordinary and what better way to enhance a child’s learning experience than with a 3D pop-up activity app. This will bring hours of fun to pre-schoolers who are fans of the hit series and will appeal to those new to the property,” said Valerie Fry, Director of Sales, Coolabi. “StoryToys is a well respected and experienced partner and we have enjoyed collaborating with them on this launch.”

Poppy Cat and the Bubble Volcano includes the following features:

• Bright, colourful illustrations based on the TV animations

• Read to Me, Read it Myself, and Autoplay modes

• Charming musical sound effects and soundtracks from the TV series

• Fully localized for US and UK English, French, and Spanish

For further details, screenshots, info or if you would like a review code please contactpress@storytoys.com.

Headquartered in Dublin, Ireland, StoryToys creates and publishes highly innovative and entertaining software for children including interactive books and games. StoryToys is a registered trademark and trading name of StoryToys Entertainment Ltd. Apple, iPad, iPhone and iPod touch are trademarks of Apple Inc.,registered in the U.S. and other countries. Google Play and Android are trademarks of Google Inc.

About The Kindly Ones Productions:

The Kindly Ones Productions is a developer of children’s apps and games. Poppy Cat and the Bubble Volcano is the company’s first release.