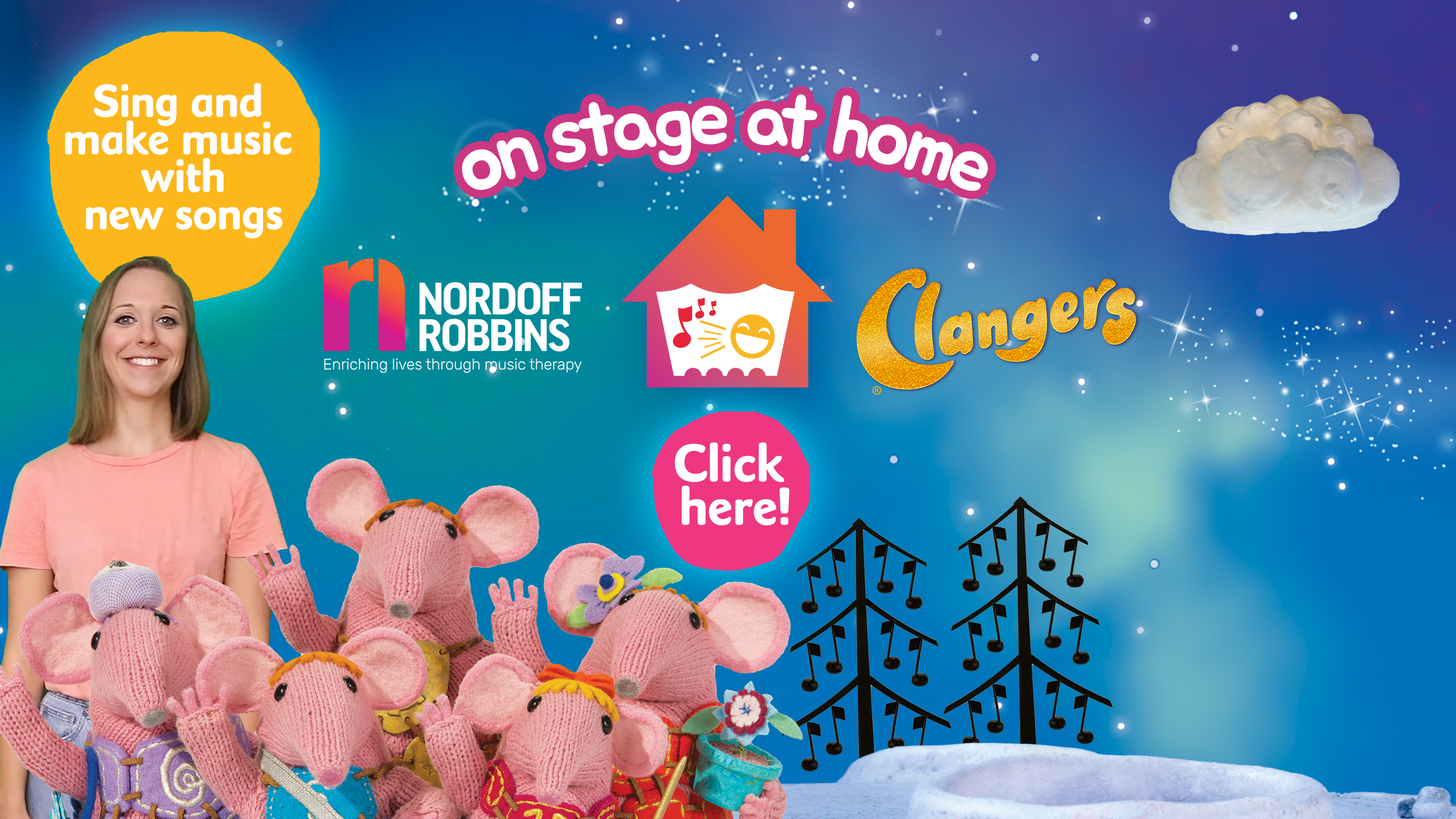 On Stage At Home with Clangers and Nordoff Robbins

Launching online on Tuesday 28th April, ‘On Stage at Home with Clangers and Nordoff Robbins’ is a brand-new interactive series of musical videos, featuring specially created songs and music for young families to perform whilst at home together during lockdown and beyond, using instruments they find or make.

The first two videos in the series will launch online on 28th April at nordoff-robbins.org.uk/on-stage-at home, and families with young superstars across the UK are encouraged to make their own videos and performances, to share music and togetherness with friends and loved ones online.

The much-loved show has music and community at its heart, which makes the Clangers a perfect fit to help Nordoff Robbins champion music as a way to help families everywhere stay as connected as possible, whilst showing that music can be made and enjoyed by anyone, regardless of whether they have instruments or musical training.

‘On Stage at Home with Clangers’, features songs created and performed by Louise Gregg, a Nordoff Robbins music therapist, with a little helping hand from the Clangers, to demonstrate the positive impact that music can have on everyone’s health and wellbeing.

The Clangers planet is filled with music and dancing; growing on the planet are music trees and singing flowers, and they often row out on their music boat to go fishing or visit the Iron Chicken.  They also find, and discover new uses for, unusual objects on their planet, so throughout the series, they will help with tips and encourage families to create musical instruments and sounds from objects found in their homes, from sieves, to spices, wooden spoons, pots and pans and everything else in between.

The first two songs to be released will be:

Let’s Go Finding Sounds, which encourages children to use whatever they have around them to make music, teaching them that you don’t need musical instruments for music to happen. It helps them explore items imaginatively, and to hear all sounds as music as well as helping them to think about the different types of sounds.

Music Machine, which uses different body parts to engage with rhythm and sounds. This encourages coordination development as well as keeping the beat. Combining movement with the beat of music helps children to control and time their movements and to learn the speed and energy that needs to go into different movements. Using sounds with their bodies will also help children become aware of how their bodies themselves are musical.

Jeremy Banks, Chief Executive of Coolabi, comments: “Clangers and Nordoff Robbins have such wonderful synergy, we felt this was the perfect partnership to create a positive and community focused initiative for Clangers fans old and new.

“We hope ‘On Stage at Home with Clangers’ will bring some joy to families across the UK, at a time when being creative together and staying connected are more important than ever.”

Sandra Schembri, CEO of music therapy charity Nordoff Robbins, said: “We believe in music and the benefits it can bring, from supporting children’s development and coordination to helping people’s mental well-being in times of social isolation, which is why our partnership with Clangers has come at such an important moment. As families are finding themselves spending a lot of time at home, making music and the benefits it brings are essential to staying healthy and connected.

“We want ‘On Stage at Home’ to encourage children to make music and to think about the different types of sounds they can make, learn about the timing of their movements and how their bodies themselves are musical.

Music brings us closer together. It can be made and enjoyed by anyone, and at times like this, the benefits that music brings are more important than ever.”

Clangers, which celebrated its 50th anniversary in 2019, is the BAFTA award-winning, pre-school stop motion-animation featuring a family of loveable, pink, mouse-like creatures who communicate in whistles and live out in space on their Little Blue Planet.

Nordoff Robbins is the largest independent music therapy charity in the UK, dedicated to enriching the lives of people affected by life limiting illness, isolation or disability. Their expert music therapists can help children with autism to speak for the first time, people with dementia reconnect with family members and give those living with mental health problems moments of genuine calm and peace.

Produced in partnership by Coolabi Group and Nordoff Robbins, the videos were created and edited by a team of people at home across the UK, including, Chris Tichborne, co-director of Clangers using footage originally animated at Factory in Altrincham, Louise Gregg, music therapist for Nordoff Robbins, and Instruct Studio in Manchester.

‘On Stage at Home with Clangers’ will launch on Tuesday 28th April at nordoff-robbins.org.uk/on-stage-at home